Heavenly Voices At The Carmelite Priory

The Carmelite Priory in Mdina was the venue for a Christmas Concert by the Jubilate Choir. The melodic voices soared beautifully in the ornately decorated refectory in which the friars used to eat their meals.  This amazing room is a fine example of a total work of art where the architecture, paintings and sculpture come together to form a unique Baroque gem. 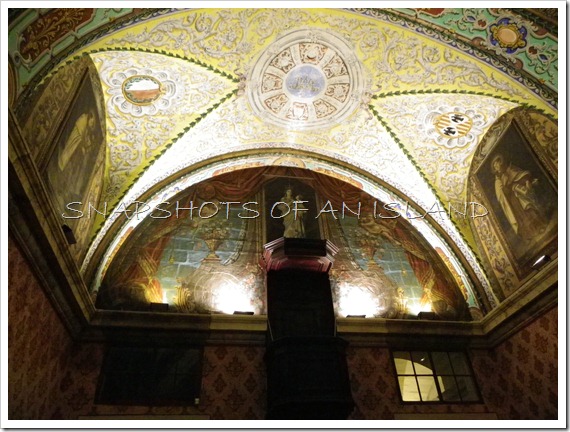 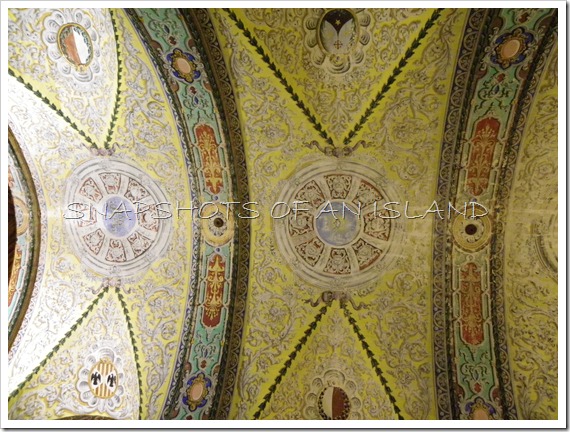 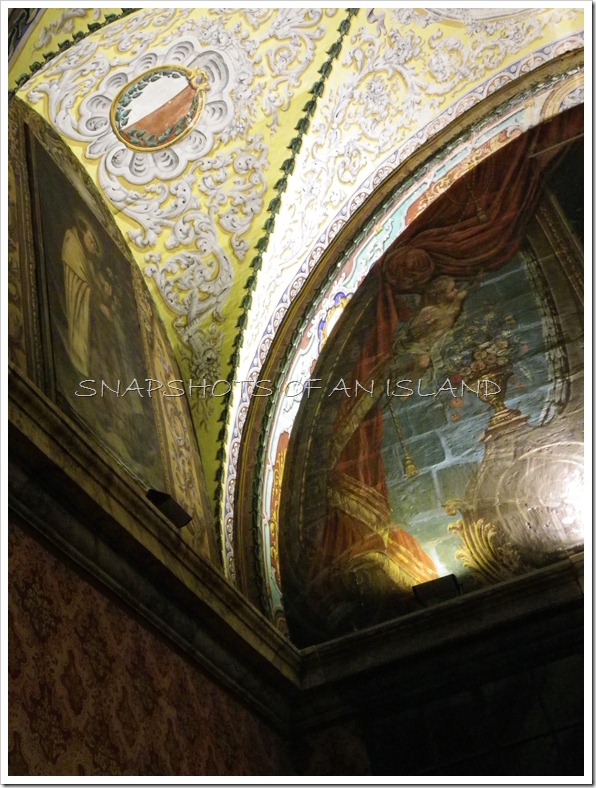 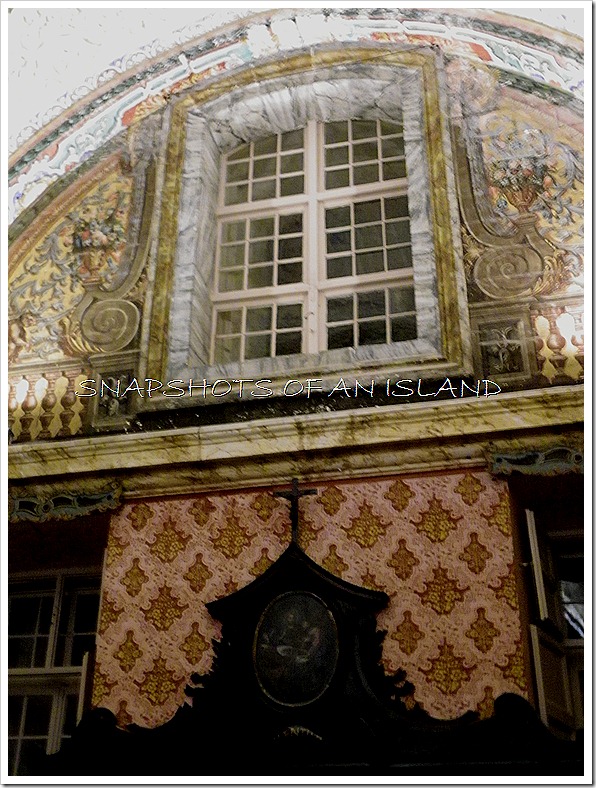 It was a perfect and intimate setting in which to enjoy wonderful renditions of traditional favourites such as Silent Night and O Come All Ye Faithful together with a medley of Italian and Maltese carols. 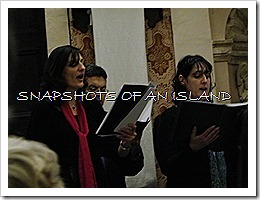 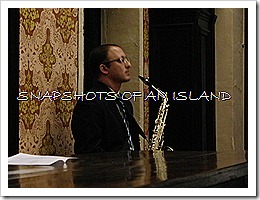 Concerts at the Refectory are held on a regular basis with proceeds and donations going towards restoration of the paintings on the breath-taking ceiling of this room. The Carmelite Priory Museum is open daily to visitors between 10.00 and 17.00 hours. 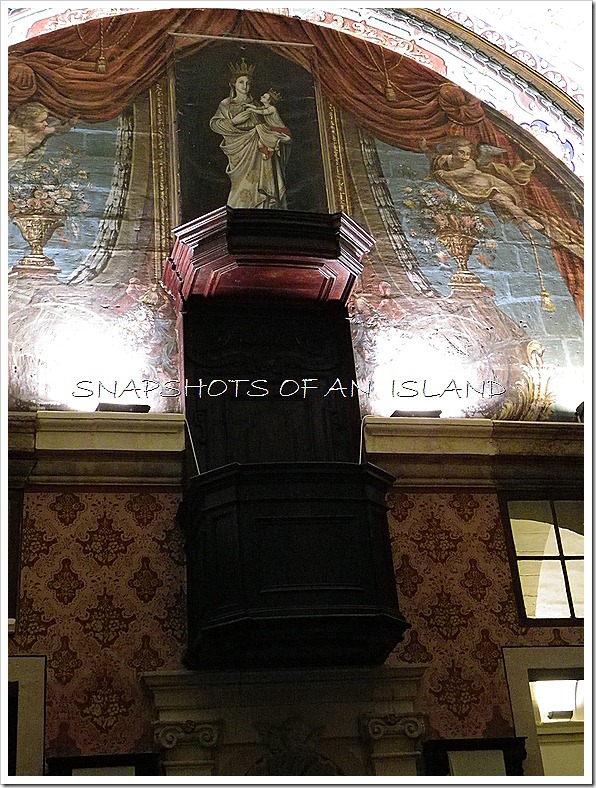 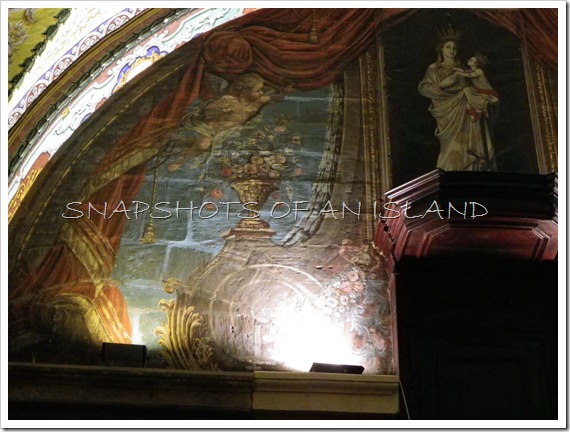 With this last post for 2010, I would like to wish all my readers a very happy new year.

It’s Christmas Time In The City

The decorations in Valletta this Christmas are very simple but quite striking. 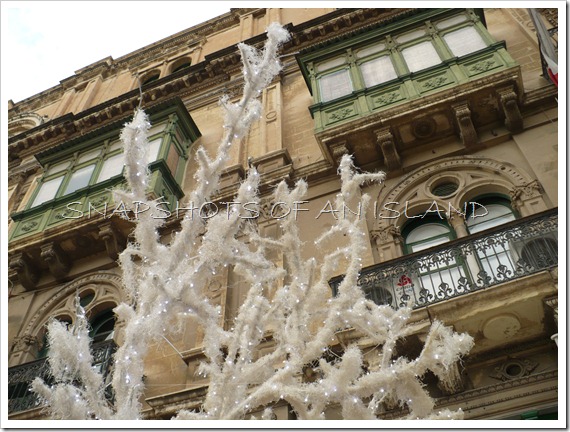 I suppose it was the local council’s way of bringing an ‘icy’ feel to our Mediterranean Christmas. 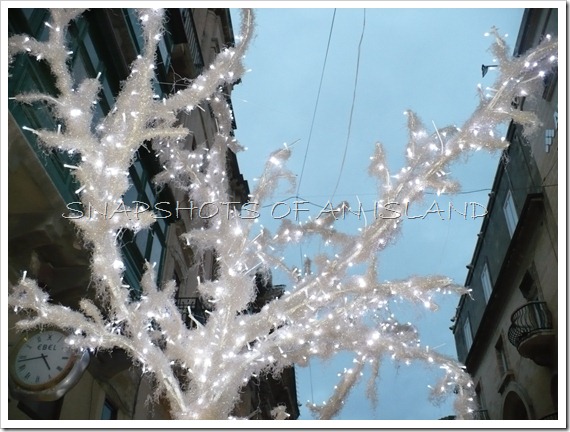 Our capital city may not be as large and imposing as other cities but it has its own innate charm. 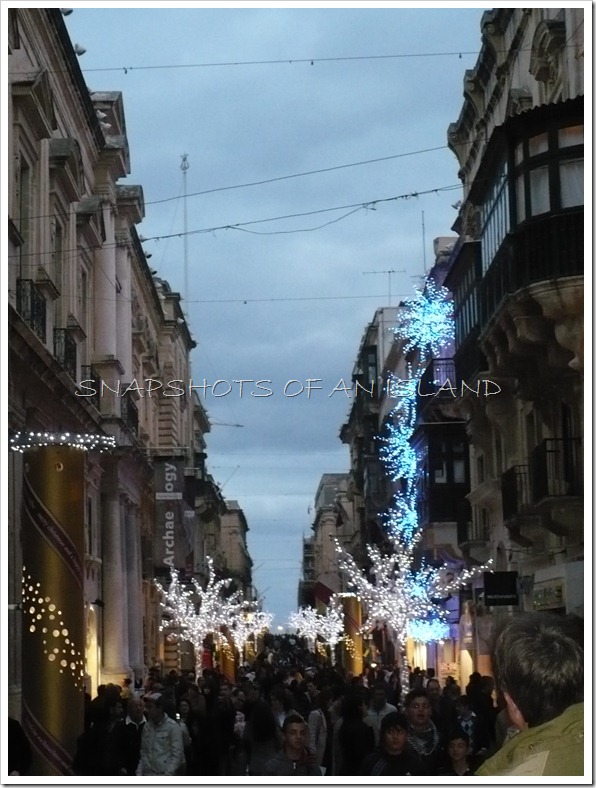 And I think it photographs beautifully, even when night falls.

(I do hate those overhead wires though and I hope that they do something about them soon). 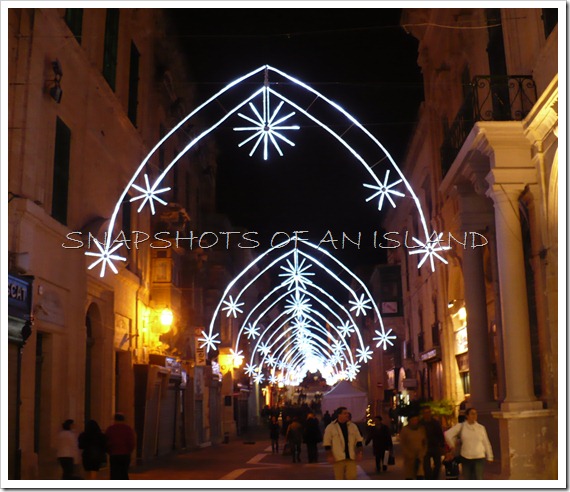 In the days before weather forecasts and satellites, the people of these islands (mostly the farmers) adopted a curious method of trying to predict the weather for the following year. Starting on the twelfth day before Christmas, they would observe the weather of each day noting shifts in the wind, the amount of clouds in the sky, and any rainfall or sunshine. The first day on which this was done, December 13th, would correspond to January, the next day to February and so on. In this way they thought they would have an idea of what the next year would bring. This ancient way of predicting the weather is common  in most parts of Europe, although in some countries, the calends (irwiegel) start on different days. Countries whose calends start on the same day as Malta are Portugal, Sicily (from where this tradition was most likely adopted), France, Croatia and certain provinces in Italy. Each day started at midnight and farmers, or anyone else interested in predicting the weather in this ancient fashion, were supposed to take note of the weather variations that occurred throughout the course of each day. 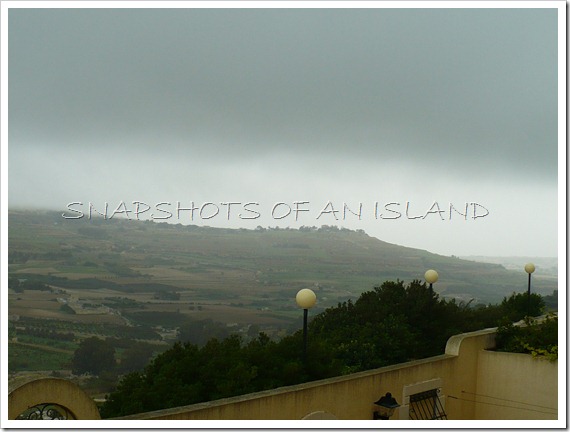 Anyone inclined to follow this tradition can start noting the weather patterns each day from next Monday until Christmas eve. So, we will soon know whether we are going to have a warm February (which has not been unusual these last couple of years) or hail in August (highly unlikely). Although there is no scientific data to back this tradition, some elderly farmers claim that they used to use this method with success. Nowadays, this tradition has all but died out since it is considered to belong to the realms of superstition and ignorance. Personally, I think that there is no harm in trying this out, just for fun. After all, there is usually an element of truth in all traditions that have spanned so many generations. So, rain or shine? If the irwiegel are to be believed, I guess we will find out soon. 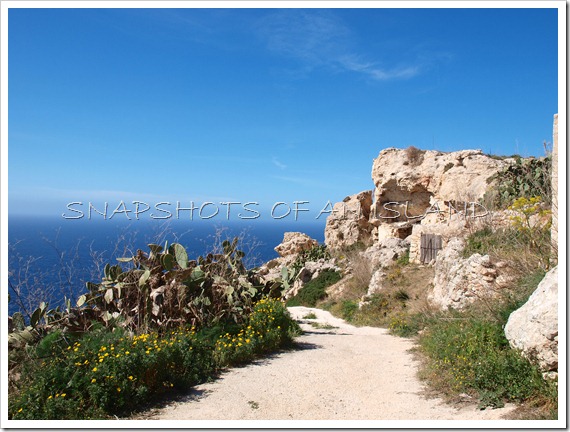 (Believe it or not, this photo of a cloudless sky was taken last February).