Malta And The Movies (1)– Malta Story

This series of posts is inspired by Suze, writing at  Girl Wizard, who has been sharing some of her favourite movies with us. So I thought, why not a post about movies filmed in Malta? Although small, Malta has a number of interesting locations which have been used as the backdrop for a number of movies. You can go to Wikipedia for a full List of Films Shot In Malta. Every now and then over the next couple of months I will give you a brief overview of the ones which went on to become famous. Today I will start with the earliest movie shot in Malta which was Malta Story released in 1953.

Malta Story (1953) starring Alec Guinnes, Jack Hawkins and Muriel Pavlow is based on life in Malta during WW2, the island and its people and the RAF aviators who defended it with their lives. Although the acting is very much in 1950s style and the ending is quite predictable, this movie does give a good portrayal of what it was like to live in Malta during WW2 when daily air attacks were the order of the day and most of the population spent long hours in  underground shelters that were hewn out of the limestone all over  the island. This film was shot at various locations around the island including: the Lascaris War Rooms, Fort St Elmo, Grand Harbour, Valletta, Ta Qali and the Neolithic temples of Mnajdra. 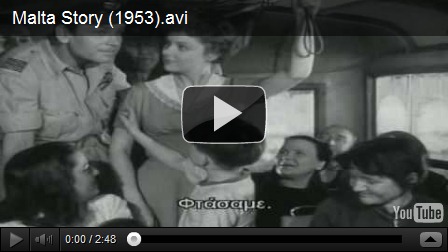