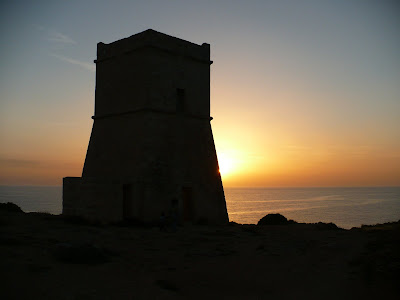 Photo by Darin Dykstra
They stand on rocky promontories of our coast. Silent sentinels of a distant past. Battered and broken by the passage of time; their stones eroded by wind and sea. Time has wrought many changes to this island they guard. No corsairs or pirate ships roam our shores. No gun shots break the stillness; no cries of wounded and dying men. Today their silent gaze reminds us of a troubled past, the vacant posts a memory to the men who guarded this land. Their work is done; their youth is past. In the sunset of their life they scan the distant horizon and dream – the silence broken only by the distant booming of the restless sea.
Historical Note
A total of 18 towers were built in the style shown in the photo by Grand Masters Juan de Lascaris and Martin de Redin. The first five Lascaris towers were built between 1637 and 1640 whereas the remaining 13 de Redin towers were built between 1658 and 1659. The towers are known collectively as the de Redin towers. All the towers are within sight of each other and their main function was to act as watchtowers against attack by corsairs.
at July 19, 2009