What’s On In Malta In December

I have been feeling the need to change things a little bit around here. I do not want this blog to just end up being a historical archive. As a result, at the beginning of every month, I will pick a few events taking place here in Malta that I think will be of interest to those that live here or plan to visit in the coming weeks.

A frock swap in aid of The Island Sanctuary will take place to coincide with the official opening of SoapCafé. Details of the Frock Swap may be found here. SoapCafé  produce totally natural and virtually edible beauty products for all ages and skin types. The official programme of this event may  be found here. 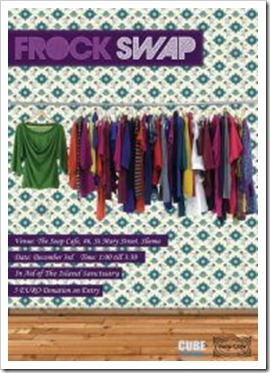 If you are looking for a unique  hand made gift to give to your loved ones this Christmas (or if you would like to indulge in a little something for yourselves) an Artisans Market is taking place at the Grand Ballroom of the Phoenicia Hotel. There will be 60 stalls selling arts, crafts and artisan food products. 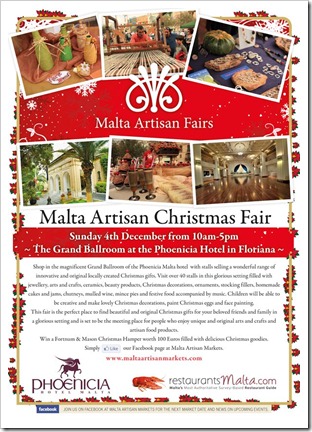 This exhibition which was inaugurated on 7th November 2011 will continue until the end of April 2012. The Spanish treasure from the Khalili collections  consists of works of art of  Spanish damascene metal. The preservation of the art of damascening in Spain was almost entirely due to the efforts of a single family: the Zuloagas. A number of the works of art on display were created by Placido Zuloaga, the supreme artisan of the family. A number of artefacts from Malta’s National Collection will also be on exhibit.

This year the Malta Fairs and Convention Centre in Ta’ Qali has brought to Malta a unique Christmas crib made from 8 tons of salt from the Patraia Soprana mine in Italkali near Palermo (Sicily).  The crib has an area of 60 square metres and is adorned with terracotta figures.

Other attractions include a chocolate village, a 17 metre high Christmas tree, a light show and a Christmas shopping mall.

From 04/12 to 25/12 the streets of the village of Lija will come alive as about 100 locals re-create the traditional nativity scenes.

Heritage Malta is again inviting members of the public to attend a guided tour of Mnajdra Temples and to participate in the winter solstice. This is the perfect opportunity to learn more about our prehistory and the ancient fertility cult practiced by the first inhabitants of these islands. The Mnajdra temples are situated in a unique location close to the edge of cliffs that rise sharply out of the sea. On the day of the solstice, due to the special alignment of the temple, the first rays of the rising sun will fall on a megalith to the right of the central doorway of the main temple. Whether this alignment is coincidental or planned is still a matter of debate although most archaeologists think that it was the latter.

The number of tickets for this event, which starts at 6am, are limited so as to enhance the experience of all those that attend.

Image via The Times of Malta

FM Productions present Ali Baba at the Manoel Theatre in Valletta. Tickets may be booked here.

December 22nd-January 8th: The Princess and the Pea-A Christmas  Panto

MADC present The Princess and the Pea at the MFCC theatre in Ta’ Qali. Directed by Nanette Brimmer, the part of the Dame will be played by Alan Montanaro. Tickets for this production may be booked here.

The Christmas pantomime is one of the most well-established events of the local Christmas season and is enjoyed by young and old alike.

For more events taking place during December go to my What’s On tab at the top of this page.

Email ThisBlogThis!Share to TwitterShare to FacebookShare to Pinterest
Labels: events, What's On